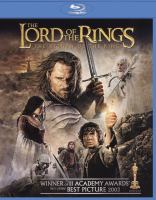 The Lord of the Rings

The Return of the King

This third installment finds Middle-Earth on the verge of great change. Frodo and Sam are approaching Mount Doom to destroy the One Ring and a massive battle is about to ensue that will determine the fate of Middle Earth.
Publisher: [Los Angeles, Calif.] : New Line Productions, [2010]
ISBN: 9780780661516
0780661516

Alternative Title: Return of the king

I read the books first and then watched this series. I really enjoyed it and the actors do a really great job. The action is great. Highly recommend. I ❤ Legolas!! XD

This was another truly amazing Lord of the Rings movies! Lots of action, definitely the best of the series. Still the actors are great at playing their characters, and the plot is still interesting they didn’t fall through like in another movie.... This series is highly recommended for anyone that likes action and loves being introduced to a fictional world. Overall awesome movie!

One of the greatest films ever made ~420 truly an Epic

The Lord of the Rings: The Return of the King Film Review

The Lord of the Rings: The Return of the King is an epic fantasy adventure film directed by Peter Jackson released in 2003. This film is based on the third and final volume of the same name of J.R.R Tolkien’s Lord of the Rings.

Before I get into this review, I would like to say that if you are reading this review without seeing the first and second films in the trilogy, The Fellowship of the Ring, and The Two Towers respectively. I would highly recommend that you watch those films first, as they are both incredible films, and this review contains spoilers for both, as this film is the finale of the trilogy. Not only that, but this review contains some spoilers about this film as well, so read at your own risk.

In the third and final movie in The Lord of the Rings trilogy, Frodo and Sam continue their journey into the Land of Shadow, Mordor, and to Mount Doom, in order to complete their heroic quest of destroying the dangerously evil One Ring and putting an end to the Dark Lord Sauron’s ascendancy. They are led by Gollum, who however, is beginning to plot against them. Meanwhile, the rest of the broken-Fellowship of the Ring, along with many others, reunite once more against Sauron and his army of monsters at the white city of Gondor, Minas Tirith.

This film upon its release, was arguably the most hyped movie in the world. The other two films in the trilogy before it, The Fellowship of the Ring and The Two Towers, were considered by critics and fans alike to be fantastic and were already being called two of the greatest films of all time. So of course, there was skepticism about whether the film would live up to the hype generated. Many also thought the film might be terrible, as at the time, it was rare for a film trilogy to have a good ending, as films like Star Wars: The Return of the Jedi, and The Godfather Part III had very mixed reception. However, all of these doubts were put to rest once the film finally came out. The Lord of the Rings: The Return of the King surpassed the hype generated, and just like the rest of the trilogy, garnered high acclaim from both critics and fans, even more so than the others in the trilogy. I one hundred percent agree with all of this. In my opinion, The Return of the King is the best of The Lord of the Rings trilogy, and in this review, I will be saying why. Though, first I will be saying what my dislikes of the film are, because as they always say, there are no perfect films.

Legolas is literally the best.

I absolutely loved Tolkien as a child and adult, and waited a long time for these favorites to become movies. The series did not disappoint - the movies were as visually spectacular as the scenes that played out in my imagination. The complex story lines had to be adapted for film, understandably, but Peter Jackson did an outstanding job!

One of the greatest movies to ever exist.

This was a fantastic close to the trilogy .

It won 11 Academy Awards; it deserves them all. Probably the best third part of a trilogy ever made.

The Lord of the Rings movies were actually filmed as one movie, and then edited into three parts. Seen as a single, connected movie, this is one of the best movies ever made.

"Bless us and splash us, my precious"
- Gollum

Aragorn: Hold your ground, hold your ground! Sons of Gondor, of Rohan, my brothers! I see in your eyes the same fear that would take the heart of me. A day may come when the courage of men fails, when we forsake our friends and break all bonds of fellowship, but it is not this day. An hour of wolves and shattered shields, when the age of men comes crashing down! But it is not this day! This day we fight! By all that you hold dear on this good Earth, I bid you *stand, Men of the West!*

I know this isn't in this movie, it is in the Two Towers (also an awesome movie) but I love it!
Gimli: Legolas, I have 2 already!
Legolas: 17!
Gimli: I will not be beaten by an elf!

Gandalf: Fool of a Took!

Gimli:.... certainty of death, small chance of success- WHAT ARE WE WAITING FOR????

Frightening or Intense Scenes: lots of orcs and it may frighten younger viewers

Violence: lots of killing and some blood and epic battle scenes

Frightening or Intense Scenes: Lots of battles and horrible orcs; a despicable creature called Gollum; the Nazgul on their dinosaur-like steeds; a giant spider called Shelob

Violence: several battle scenes, and the battleground littered with bodies.

Frightening or Intense Scenes: what erry29 said. and there is one kiss at the very end. don't let that be a deterrent from you watching the movie. greatly recommended!

Frightening or Intense Scenes: gollum, shelob, and frodo getting his finger bitten off... BLECH!

Violence: orcs get their heads chopped off, and other gross stuff.

Violence: Sword fighting and arrows are shot. Battles between men and creatures.

blue_panda_4979 thinks this title is suitable for 9 years and over

FriendsDragonsCats44 thinks this title is suitable for 13 years and over

Always_a_MarySue thinks this title is suitable for 12 years and over

7Liberty7 thinks this title is suitable for 13 years and over

Elentari thinks this title is suitable for 10 years and over

tlhull thinks this title is suitable for 13 years and over

UnbreakableValour thinks this title is suitable for 10 years and over

jabey thinks this title is suitable for 8 years and over

As Frodo and Samwise continue their journey to Mordor to defeat the One Ring, Aragorn struggles to follow his destiny- to be the true King of Middle-Earth. In between that, he and Legolas the Elf, and Gimli the Dwarf fight dangerous battles of Middle -Earth to try to let the race of Men stand strong. Will Frodo destroy the Ring? Will Aragorn be crowned the King of Gondor? Find out in this epic film.

Frodo and Sam continue on to Mordor in their mission to destroy the One Ring. Whilst their former companions make new allies and launch an assault on Isengard.