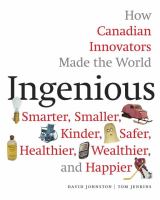 Successful innovation is always inspired by at least one of three forces--insight, necessity, and simple luck. Ingenious moves through history to explore what circumstances, incidents, coincidences, and collaborations motivated each great Canadian idea, and what twist of fate then brought that idea into public acceptance. Above all, the book explores what goes on in the mind of an innovator, and maps the incredible spectrum of personalities that have struggled to improve the lot of their neighbours, their fellow citizens, and their species. From the marvels of aboriginal invention such as the canoe, snowshoe, igloo, dogsled, lifejacket, and bunk bed to the latest pioneering advances in medicine, education, philanthropy, science, engineering, community development, business, the arts, and the media, Canadians have improvised and collaborated their way to international admiration. Ingenious tells you why they did it and how they made the world a better place.
Publisher: [Toronto] : Signal/McClelland & Stewart, 2017
Copyright Date: ©2017
ISBN: 9780771050916
0771050917

Book shined spotlight on Canadians that were ignored because of sexism, bought out by American, ignored by government, bought out by their backers, quirky patent laws to just being generous.

Very interesting. We Canadians are an innovative bunch! Being a former employee, I was disappointed that in the feature of the discovery of insulin there was no mention of it being produced at Connaught Labs, in Willowdale, Ontario, although the picture did have that name showing on the label.

A book review, written for the Stratford Gazette in June, 2017, can be found in "Summary".

From Jolly Jumpers and Pablum to dump trucks and the Hurricane aircraft, Canadian inventors have provided the country and indeed the world, with some of the most successful and incredibly varied inventions known. In their book Ingenious: How Canadian Innovators Made the World Smarter, Smaller, Kinder, Safer, Healthier, Wealthier and Happier, Governor-General David Johnston and entrepreneur Tom Jenkins celebrate Canada 150 with a joyous and inspirational look at the history of invention in Canada, from the earliest Aboriginal times to the modern day.

The geographical and cultural needs for improvisation and collaboration have been the key factors in making our country such a leader in innovation. This book explores the people and the processes followed in order to produce such a range of designs, devices and gadgets. It is a fitting tribute to a nation of innovators, and hopefully an inspiration to the upcoming generations as they strive to make the world a better, or just more amusing place. Did you know that the Whoopee Cushion was a Canadian invention? Yup, made in Toronto.

Ingenious: How Canadian Innovators Made the World Smarter, Smaller, Kinder, Safer, Healthier, Wealthier and Happier by Governor General David Johnston and Tom Jenkins, 232 pages.
@ SPL: J 609.71 Joh
The title of this book, written to celebrate Canada’s 150th birthday, is entirely accurate: inventions and innovations developed by Canadians truly have made the world a better place, changing the ways in which we live, work, travel, communicate and play.
Consider the world of medicine. The world is significantly healthier thanks to the meningitis vaccine, the pacemaker, insulin, the microsurgical staple gun, the prosthetic hand, telesurgery, the “HIV cocktail” and many other Canadian innovations.
Canadian innovations in transportation and communications that have helped to make the world smaller include the canoe, kayak, dogsled, snowmobile, ski-doo, air ambulance, telephone, radio voice transmission, walkie-talkie and the digital telephone switch.
Happier? There’s no doubt that maple syrup, butter tarts, poutine, peanut butter, McIntosh apples, hockey, lacrosse, basketball, vehicle air conditioning, electric wheelchairs and life jackets have all increased global happiness.
Even nuclear physics, liquid helium, the concept of a shared currency (such as the Euro), the zipper, Superman and the Wonderbra originated in Canada!
The many contributions of Canada’s indigenous people are acknowledged, and advice for future innovators is sprinkled throughout this timely, comprehensive book.
** Recommended for ages 8 years and up, including adults.
** Reviewed by Sally Hengeveld, librarian, Stratford Public Library.