Saved Searches Advanced Search
Library services are now restored to most VPL locations with modified hours and offerings. For more information on changes to our services and current hours, please see: Updates on the Library’s Response to COVID-19.
Print 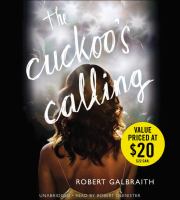 "After losing his leg to a land mine in Afghanistan, Cormoran Strike is barely scraping by as a private investigator. Strike is down to one client, and creditors are calling. He has also just broken up with his longtime girlfriend and is living in his office. Then John Bristow walks through his door with an amazing story: his sister, the legendary supermodel Lula Landry, known to her friends as the Cuckoo, famously fell to her death a few months earlier. The police ruled it a suicide, but John refuses to believe that. The case plunges Strike into the world of multimillionaire beauties, rock-star boyfriends, and desperate designers, and it introduces him to every variety of pleasure, enticement, seduction, and delusion known to man" -- from publisher's web site.
Publisher: New York : Hachette Audio, 2013
Edition: Unabridged
ISBN: 9781478980841
1478980842

Private Investigator Cormoran Strike is barely holding it together when his small agency gets a new high profile case. A famous young model has fallen from her penthouse apartment. Her death was ruled a suicide but her brother is convinced she was murdered and hires Strike to investigate. First b... Read More »

Private Investigator Cormoran Strike is barely holding it together when his small agency is given a new high profile case. A famous young model has fallen from her penthouse apartment. Her death was ruled a suicide but her brother is convinced she was murdered and hires Strike to investigate. Fir... Read More »

Private Investigator Cormoran Strike is barely holding it together when his small agency is given a new high profile case. A famous young model has fallen from her penthouse apartment. Her death was ruled a suicide but her brother is convinced she was murdered and hires Strike to investigate. Fir... Read More »

List - VPL - Books Just for You - A Mix of Fast-Paced Mystery, Thriller and Fantasy

List - VPL - Books Just for You - Love, Thrills and Horror (Though Not All in the Same Book)

I've missed reading a good, solid mystery novel. And I've also missed JK Rowling's signature style of narration and description. I don't think I've read anything by her since Harry Potter, and that was over a decade ago. The Cuckoo's Calling was like coming home in a way.

Successful mystery novels all share a trait that, in my opinion, is one which makes or breaks them. Of all the details and clues thrown at the reader, the important ones need to stick. But not overtly. They need to subtly fuse themselves just inside the subconscious, ready to be retrieved at a later point when putting the whole mystery puzzle together. When some new mystery novel is lauded in the media as a must-read, I often assume it successfully figured out how to navigate that delicate balance of story, clues and revelation.

Really, really great book! My first time listening to this author and am greatly looking forward to the next books in the series! Highly recommend it!

Mystery lovers who like a clever, well-organized puzzle will definitely enjoy this.

I liked the book. Interesting story and characters. I was a bit put off by the amount of foul language though. That's why I took 2 stars. I understand the 'trying to be "realistic" Nevertheless, I read a lot of detective thrillers and the likes and have enjoyed books that I can't put down that doesn't necessarily exploit this resource to a limit. I respect her as a writer. Is my first read under this pen name. I will continue to explore the series and see.

As with most mysteries, it’s not until the very end that I figured it out. Fun read.

Cormoran Strike is having a bad day. He has just broken up with his fiancée of 15+ years and is now virtually homeless, resorting to sleeping in his office. His PI business is floundering, and he is up to his eyebrows in debt. His prosthetic leg (the result of his tour in Afghanistan) is giving him grief and the temp agency has sent him another secretary who is surplus to his needs.

And then John Bristow walks through the door. Wealthy, and the brother of Charlie and Lula, both now deceased, Bristow could just be Cormoran’s ticket out of his troubles. Charlie, a school mate of Cormoran’s, died years ago when he rode his bike into a quarry; Lula Landry, the famous model, committed suicide a few months back by jumping out of her apartment window – or so the police concluded. It’s Lula’s death that Bristow wants Cormoran to investigate because he believes it was anything but suicide.

So Cormoran insinuates himself into the world of high fashion, rock stars, and dysfunctional families (the least of which is his very own).

Galbraith (the pseudonym of J. K. Rowling) has created a fresh new character in Cormoran – someone who endears himself to the reader after the first chapter. I enjoyed every page of this novel – the humour, the cleverness of the plot, and the well formed characters. Cormoran is a character I want to read more of!

A classic J.K. Style novel with twists and turns and a very long plot. Need to stay invested for what you hope is a good plot payout

Why has the OPL allowed me to put a hold on the large-print edition of this book when it no longer appears to have a copy of it?

another name for JK Rowling. didn't like this book much

jkeaton thinks this title is suitable for 18 years and over

“Humans often assumed symmetry and equality where none existed.”

How could the death of someone you had never met affect you so?

Unless you have been taking an extended tech and media vacation this summer, you will have heard that J.K. Rowling – author of the über-successful Harry Potter series - was outed as the true name behind Cuckoo’s Calling, using pseudonym Robert Galbraith. As any high-powered author would do, she sued the law firm that leaked her identity for a six-figure sum and then donated it, plus proceeds from the sale of the novel for the next three years, to The Soldier’s Charity, an organization that supports veterans and their families in Great Britain. She did this as a thank-you for those in the military who helped her with her research, leading her to create one of the most hard-boiled detectives to hit pages since Sam Spade, Cormoran Strike (how could he not be hard-boiled with a name like that?). A wounded veteran with an infamous set of rock parents, Strike grew up with his half-sister in care of his aunt and uncle. He joined the military as an investigator, went to Afghanistan and came back missing part of a leg (but is far too proud to admit it to those who don’t know him), and opens a detective agency. Unfortunately he has some hard luck with women and alcohol, until he literally runs into (and nearly knocks to her death) fresh-faced, and newly engaged Robin Ellacott, recently arrived in London from Yorkshire, who is assigned as his new temporary office worker. Robin, secretly thrilled to be working for a PI, by far the most efficient tem Strike has ever been assigned, and she proves herself both resourceful and intrepid as Strike gets his first big case – a model falls to her death and three months later her brother shows up, asking Strike to prove it was murder and not suicide. Strike is no hack – he is thoughtful, driven and methodical – much like his creator, Rowling. She slowly unveils the threads of the mystery with great care, precision, a host of fully-formed characters, more than a few red herrings and loads of wit. In fact, it is a far better book than Rowling’s last non-Potter novel, Casual Vacancy, and leaves the reader wanting to know more about Cormoran Strike. Let us hope that being outed as Robert Galbraith does not keep JK Rowling from creating further mysteries for him to solve. Cuckoo’s Calling is a first rate mystery, no matter who the author really is.