Saved Searches Advanced Search
We've reopened some locations with limited services as well as expanded takeout service.  For more information on changes to our services and current hours, please see Updates on the Library's Response to COVID-19.
Print 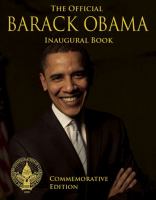 The only book commemorating Barack Obama''s historic Inauguration to be licensed by the Presidential Inaugural Committee, Barack Obama: The Official Inaugural Book lavishly documents the entire inaugural week, from Obama''s "Whistle Stop" train ride to Washington to his first days in office. With exclusive access to inaugural events, former White House photographers David Hume Kennerly and Robert McNeely led a team of award-winning photojournalists to capture this historic celebration, from the vast crowd on the Mall to the grandeur of the President and First Lady taking their places on the world''s stage, to the faces of people of all ages and races watching Obama take his oath of office. And for the first time in any official inaugural book, photographs chosen from tens of thousands of online submissions highlight the diverse perspectives of Americans at this important moment in our history. Commemorating Obama''s presidential innauguration in words as well as images, B arack Obama: The Official Inaugural Book includes a preface by Tom Brokaw : "Barack Obama understood that he was a consipicuous beneficiary of the heroic work of those generational brothers and sisters who marched with Martin Luther King, Jr., in the great nonviolent crusade for equal rights."  The foreword by U.S. Representative and civil rights leader John Lewis reminds us of the import of that day: "Barack Obama''s inauguration was a day of jubilee . . . It was as if a great weight had been lifted, and we all became aware that maybe, just maybe, we were beginning to lay down the burden of race in America." In his concluding essay, historian Douglas Brinkley meditates on the global stature of the man "who defied odds makers and transcended race to become the 44th president of the United States." The book''s timeless and elegant design juxtaposes spectacular photographs with personal written reflections on this unique celebration from a wide array of political leaders, influential thinkers, and cultural icons, such as Nelson Mandela, legendary musician Graham Nash , Mary J. Blige , and French President Nicolas Sarkozy . Like the Obama campaign itself, Barack Obama: The Official Inaugural Book is a commemorative edition unlike any other in history. From the preface by Tom Brokaw:
"It was not in name and background alone that Barack Obama shattered conventional wisdom. . . . He symbolized a new America--more urban and more tolerant, impatient with the paralyzing effect of ideological gridlock, and longing for an authentic voice calling for hope in the face of fear." From the foreword by U.S. Representative John Lewis:
"Without the nonviolent resistance to legalized segregation and racial discrimination, without the modern-day Civil Rights movement and the action that took place in Selma, Alabama, in the early 1960s, there would be no Barack Obama. The march from Selma to Montgomery in 1965 gave us the Voting Rights Act, and that act liberated not only a people, it freed an entire nation." From the essay by Douglas Brinkley:
"Barack Obama''s inauguration stands as the most uplifting public spectacle in contemporary American history since Neil Armstrong walked on the moon." About the Authors Tom Brokaw began covering the White House as a correspondent for NBC News in 1973 during the Watergate scandal. He was anchor and managing editor of NBC Nightly News with Tom Brokaw for almost 25 years, and also served as the anchor of NBC''s Today Show . He has won virtually every major award in broadcast journalism, including a dozen Emmys and two Peabody Awards, and is the author of the bestseller The Greatest Generation . U.S. Representative John Lewis was elected to Congress in 1986 and has served as U.S. Representative of Georgia''s Fifth Congressional District since then. A leader in the American Civil Rights Movement, Lewis spoke at the 1963 March on Washington, and became nationally known during the 1965 Selma to Montgomery marches. Douglas Brinkley is a professor of history at Rice University. Five of his books have been chosen as New York Times "Notable Books of the Year." His most recent title-- The Great Deluge: Hurricane Katrina, New Orleans, and the Mississippi Gulf Coast --won the prestigious Robert F. Kennedy prize. About the Photographers David Hume Kennerly won the 1972 Pulitzer Prize for his photos of the Vietnam War and two years later was appointed President Gerald R. Ford''s personal  White House photographer. American Photo Magazine named him "One of the 100 Most Important People in Photography." Kennerly has published several books of his work, including Shooter , Photo Op , Photo du  Jour , and Extraordinary Circumstances: The Presidency of Gerald R. Ford .

There are no comments for this title yet.