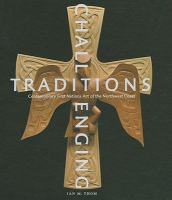 In the past few decades, contemporary Native American artists of the Northwest Coast have made a name for themselves as among the most dynamic and important artists working in North America. Challenging Traditions celebrates this success by presenting the work of forty top living artists whose works highlight the exciting combination of contemporary vitality and traditional roots.

For more than a century, Native Americans were actively discouraged from pursuing their traditional cultures by both the church and state, but they persisted in keeping alive their arts and ceremonies. With the rise of cultural and political activism, Native art is now flourishing on an unprecedented scale. Many artists are examining the meaning and purpose of Native American art in the twenty-first century, while following traditions and boldly experimenting with innovative subjects, techniques, and materials.

Ian Thom explores these contradictions by describing the career, working methods, and philosophy of each artist, all of whom he interviewed especially for this book. He also discusses at least two significant recent works by each artist.

This book is a beautiful, provocative introduction to contemporary Native American art of the Northwest Coast, in the words and works of some of its leading lights. Among the artists and their work are:

Challenging Traditions examines the work of 40 active artists from various Indigenous groups including Haida, Coast Salish and Tlingit peoples who work in a variety of media and styles from wood carving to manga.

Looks at the work of 40 active artists from various First Nations including Haida, Coast Salish and Tlingit peoples who work in a variety of media and styles from wood carving to manga.

Profiles of many well-known and lesser known artists detailing their influences and innovations.

First Nations art is dynamic and evolving. The images and profiles presented in this book provide a look into the many styles, mediums and personalities of both established and upcoming contemporary First Nations artists.

There are no comments for this title yet.